When it comes to the poutine there are variables that can change from cook to cook. 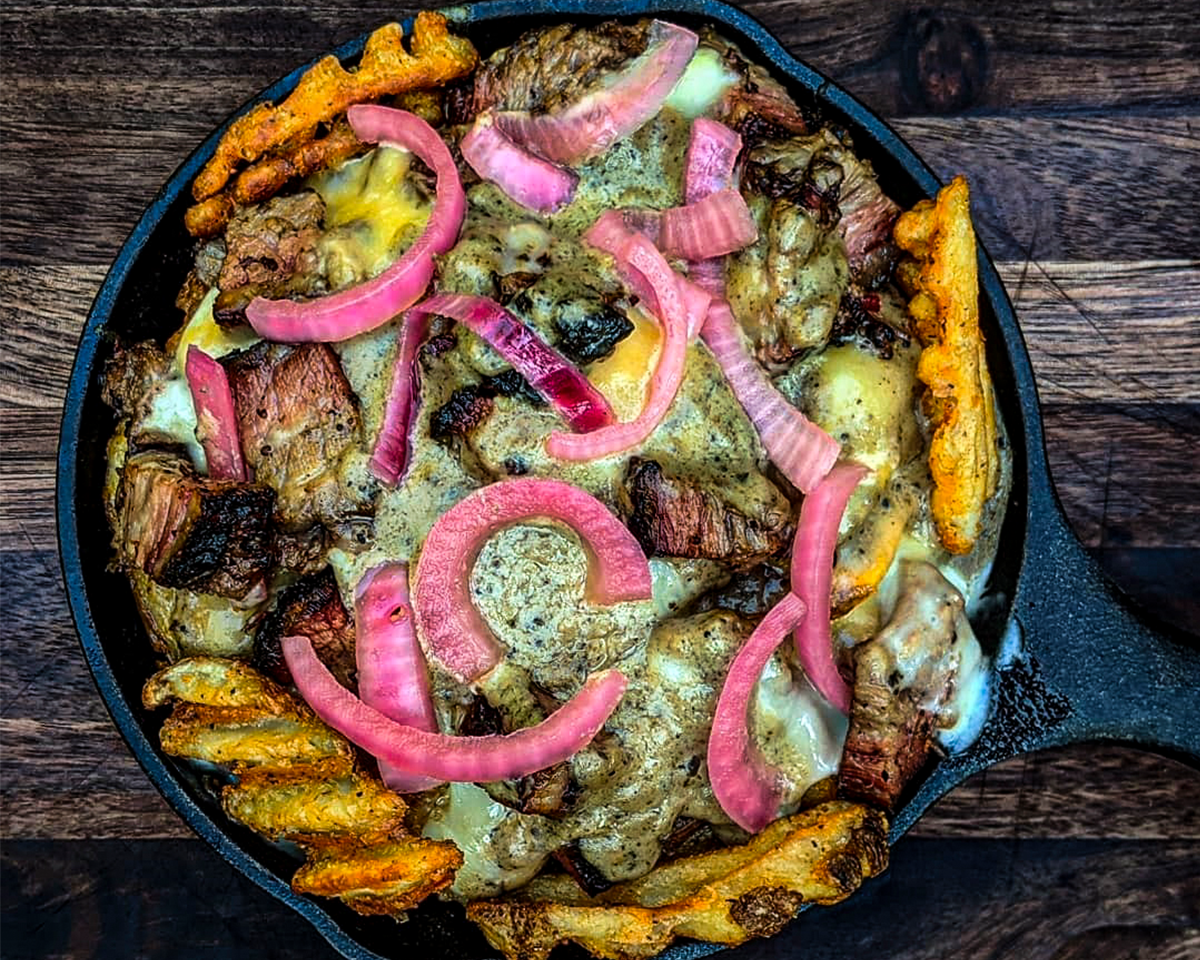 As you preheat your smoker to 225 you can begin to trim and season the brisket. Before doing anything take note of the direction that the grain runs and note that the flat and point have grains that run in different directions. This is important because when we slice the brisket we want to go against the grain for both muscles. Start by trimming the fat cap down to a 1/4″ across the top of the brisket. Too much of a fat cap will have trouble rendering and a 1/4″ is a good rule of thumb to go by and it will also leave just enough to be enjoyable while eating. After the fat cap is trimmed run a knife down the long sides of the brisket to trim off about a 1/4″ of the sides of the meat that has been oxidized since butchering. This should reveal a nice fresh edge of red meat that will hold up better during a long cook instead of crumbling from being oxidized. When the trimming is completed it is time to apply the olive oil (or mustard/ hot sauce etc.) as a binder. This is not a flavor that will be detectable after the long cook but more of a way for your rub to stick to the meat. Just a little bit of the binder will do the trick and then it is time to liberally apply your favorite BBQ rub to all sides of the brisket. A 50/50 blend of course black pepper and kosher salt will do the trick if needed.

Place the brisket on the smoker fat side up on the opposite side of the smoker as the fire box (if using an offset). The point muscle should be turned to the direction of the firebox since it will hold up a little better to the heat due to its higher fat content. The aim of the first part of the cook is to build bark and obtain a clean smoke flavor by maintaining a fire that burns clean without smoldering. Smoldering a fire will end up giving a bitter taste to the food. A clean fire paired with a low cooking temperature is a great way to build bark since cooking low will mean more time that the meat is exposed to smoke. A coarse rub will also help with bark formation by adding texture to the meat. While the brisket is cooking during this part it is a good idea to take a look after 2 hours to see if any edges are drying out. If the edges seem dry at all spritz them with a spray bottle of diluted apple cider vinegar to keep them moist. This can be done every 45-60 mins as needed.  We are going to cook the brisket until it hits the stall which can happen around 160-165 degrees internal temperature. This can vary in time and take roughly 7 hours. The stall is the point in the cook where the meat seems to not be cooking due to evaporative cooling from the rendering fat. We are going to aim for this temperature range in the flat muscle but the temperature is not the only indicator that it’s time for the next step. Those indicators are bark formation and the rendering of the fat cap. We want to make sure that the progress of the bark is dark and up to satisfaction and we also want to make sure that the fat cap is softening, which means it is rendering. You should be able to poke the fat cap on the flat with your finger and notice a change in texture occuring. We are looking for it to be more soft and squishy with a juicy texture as opposed to being more firm. If you poked around enough you might be able to feel the difference between areas of fat that are on track and other spots that still feel firm and need a little more time. Once we are satisfied with the bark formation and the rendering fat it is time for the next step, the wrap.

You can certainly cook a brisket without wrapping however for making the poutine gravy we are going to need the juices that collect in the wrap as a base for our gravy. Remove the brisket from the cooker and wrap in butcher paper (heavy duty aluminum foil will work too). It’s a good idea to spritz the butcher paper with the diluted cider vinegar to make it more pliable and wrap a little tighter. Wrapping the brisket is a good way to insulate the brisket and power through the stall.  Wrapping also gives the added bonus of trapping the juices from the rendered fat. Return to the smoker and increase the fire to 250 and cook for another 4-5 hours (if using foil the cook time may be shorter).  The temperature we are looking for as the next check point is 200 degrees in the flat muscle. When the internal temperature hits 200 it is a good time to start to go by feel for when to pull it off of the smoker. When going by feel the idea is to make sure the thermometer being used  can slide into the meat with the least resistance as possible (think melted butter). When we achieve this the brisket is done. We haven’t been checking the temperature in the point because due to the fat content it cooks at a different rate and as a general guideline the point should be at the desired doneness when the flat hits the temperature we are looking for. Remove the brisket from the smoker and let rest for 1- 1.5 hours before slicing.

At this point we can start to make the rest of the poutine but timing for this part should revolve around when the brisket will be done resting. Slice both cheeses into strips about 1/2″ thick and 2″ long, follow the manufacturers instructions for cooking the waffle fries, and prepare to make pickled red onions.  Finely slice the red onion and crush the clove of garlic then set aside. Add  a cup of cider vinegar, 1 teaspoon of salt, 1 tablespoon of pepper, 2 tablespoons of turbinado sugar and the clove of crushed garlic to a medium sized sauce pan and bring to a  light simmer until the salt and sugar are dissolved. Place the sliced onions into jar or glass container. Let cool for a few minutes and pour the vinegar mixture over the onions and stir. Let sit for at least 30 mins before serving.

When unwrapping the brisket it is very important to save the juices from the butcher paper or foil. Carefully unwrap the brisket and drain the juices into a container. When slicing the brisket it is important to slice against the grain otherwise the meat will end up being tough. As mentioned before the grain runs in different directions for each muscle which means that our slices will run in two different directions as well. I recommend using slices from the point for the poutine.  You can choose to serve the slices from the flat as you wish. The slices from the point should be a little thicker than the 1/4″ slices that would typically be taken from the flat and then cut down into  small bite sized pieces.

When it comes to the poutine there are variables that can change from cook to cook, as in how big of a batch, desired thickness of gravy and how much cheese is added. In a medium size pan over medium heat add the juice that was collected from butcher paper. Add milk and flour a little bit a time until desired thickness is achieved and season with black pepper or bbq rub to taste. Remove the waffle fries from the oven and place desired amount into an oven safe plate or cast iron skillet layering with the brisket and cheese as many times as needed. Drizzle with the brisket gravy and top with the pickled red onions. 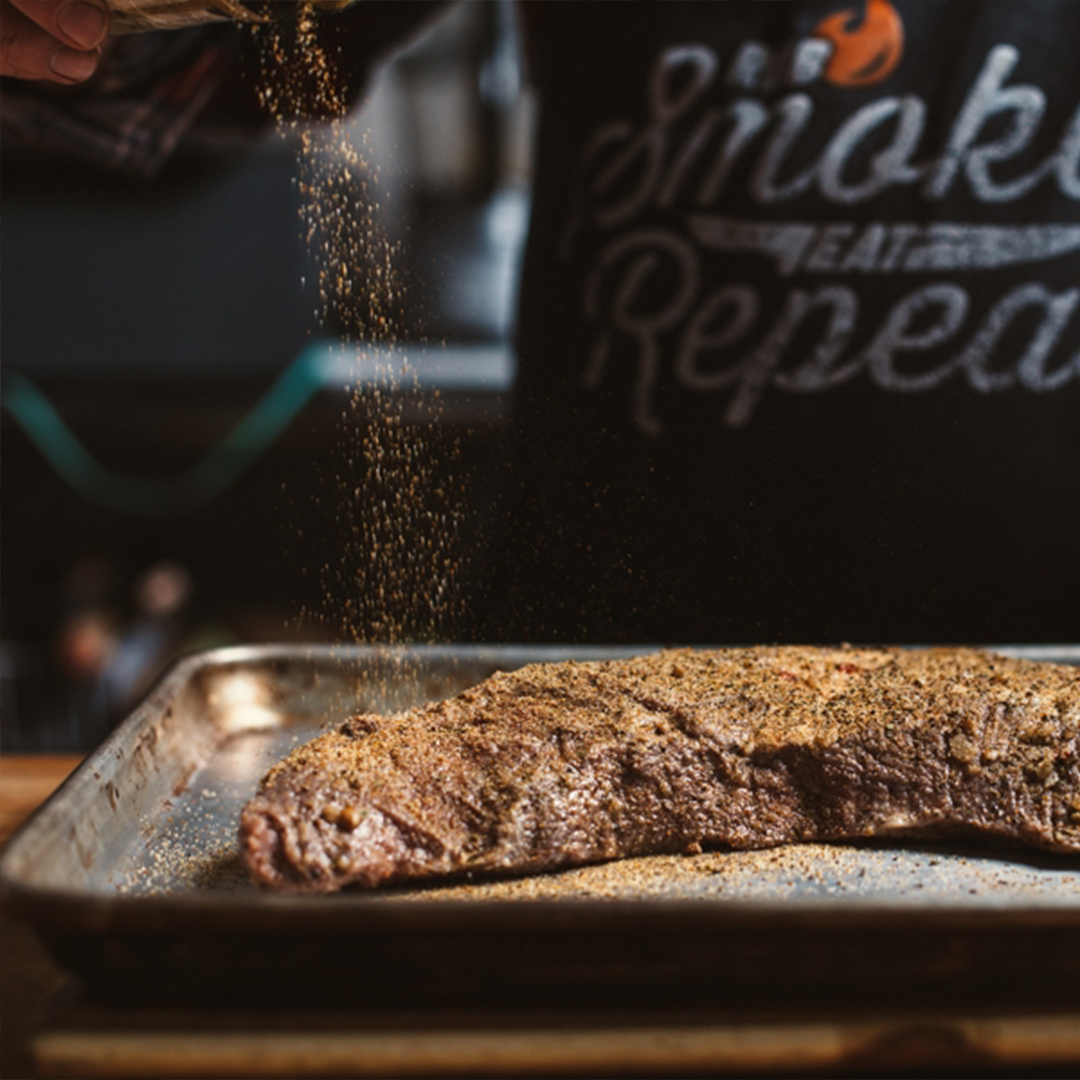 Chef Tom While this isn’t an authentic Santa Maria style tri-tip, the reverse sear method adds a touch of smoke,… 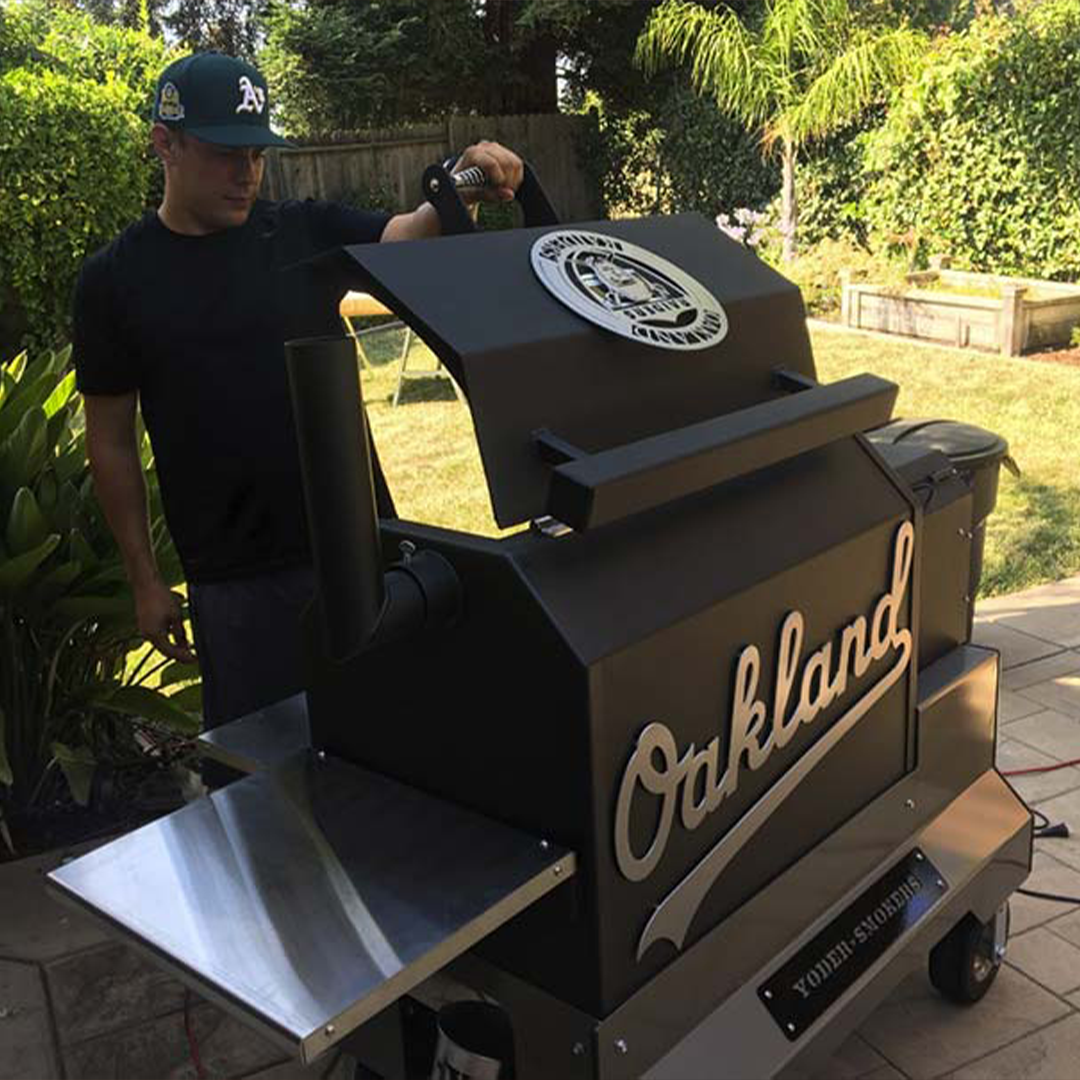 Pizza on the Yoder Smokers S-Series Pellet Grill is one of the most popular dishes when having others over. The…